Special containment procedures: A large, 12x12 steel crate was created specifically for SCP-6208, however it has since broken out since it was first introduced and has been on the move for a very long time. It is currently hunting in the small, rural area of Roeland Park, Kansas.

Description: SCP-6208 appears to be a humanoid entity, constructed out of what appears to be rusted metal. It was originally an art project put together by the ████████ of  ████████.

SCP-6208 is capable of smashing through any type of matter, whether it be metal or sticks, with relative ease. 6208 mainly relies on strength and speed to hunt down prey, but if those tactics fail, then it has a defensive maneuver prepared. When threatened, 6208 stands on its hind legs to try and intimidate the predator into running away. And even though it mainly hunts other creatures, there have been accounts of 6208 targeting humans. Survivors of 6208 describe it, albeit, ”The most terrifying thing to ever experience. I’d take SCP-5000 over this monstrosity. And, what’s weirder is that it just roams around the world, and nobody seems to care or notice.”

SCP-6208 was recorded to be on the move! It was thought to have been terminated, but we were wrong! Keep indoors! DO NOT LOOK FOR IT. 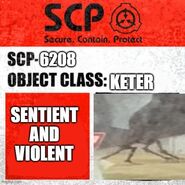 Label for SCP-6208
Community content is available under CC-BY-SA unless otherwise noted.
Advertisement